Today’s assembly focused on world leaders, as it is a very important day for America. Whether you are from England, America or the other side of the world, the face of Donald Trump can be recognised by millions due to the media coverage about the elections. By 12pm today America will have its 45thPresident enter the Whitehouse.

As Mr Shrubsall told the pupils about Donald Trump’s past, the Junior teaching staff were surprised about how much the children already knew, including what TV programme he hosted back in 2003; ‘The Apprentice USA’, what he had promised to do if he was elected president; Make America Safe, create a better economy, and to make America strong in every way; and his well-known catchphrase “make America great again”.

The children agreed that whether you supported Donald Trump or not, being President was an extremely hard job to do; in any country around the world. The pupils thought about all the world leaders who have to make difficult decisions to make our world a better place.

Congratulations to the following pupils who have received 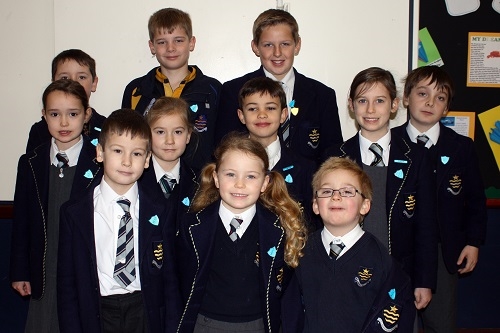 the Headteacher’s Award this week: Bryony for her History work and Clara and Cherry for their improvement in handwriting.